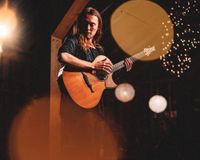 Mike Dawes is an English guitarist known for composing, arranging and performing multiple parts simultaneously on a single guitar. He is hailed as one of the world’s most creative modern fingerstyle guitarists with a repertoire spanning solo viral videos and popular arrangements, alongside mainstream chart success performing with Justin Hayward of The Moody Blues.

Dawes was named ‘Best Acoustic Guitarist in the World’ two years in a row (2017 & 2018) by Total Guitar Magazine/MusicRadar reader polls and simply needs to be seen to be believed. His ability to combine the melody, bass, harmony and percussion all seamlessly together with just one guitar leaves audiences absolutely stunned, both with original music and popular covers.