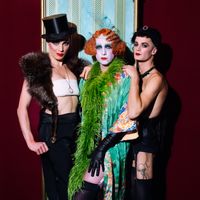 Le Pustra reimagines the Weimar Republic Cabaret Culture and recaptures the exhilarating Zeitgeist of the forward thinking 1920’s in his own unique style. Berlin’s (in) famous nightlife still fascinates us today as bohemians, artists, and historians search far and wide for that elusive “divine decadence”.

Produced by the hit-making team of Mark Siano and Opal Peachey (Bohemia, Seattle Vice) this revue is a unique chance for audiences in the Northwest to get a glimpse of the seedy underbelly of underground Berlin Cabaret and Nightlife.