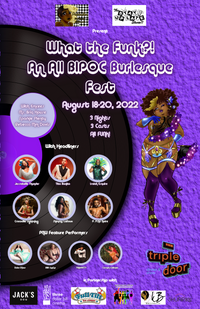 What the Funk?! An all BIPOC Burlesque Festival

You want the FUNK?! We got the FUNK!

What the Funk?! An All BIPOC Burlesque Fest is BACK at The Triple Door with another installment of their sold-out festival!

Conceived as a tribute to Funk music as a show idea in early 2018 by founder and co producer, Mx. Pucks A’Plenty, WTFFest is now a three night celebration of art and culture. Puckduction and the Stay Up Late Show bring you three nights of funk, the whole funk, and nothing, but the funk.

And the step down performance of Grand Master Funk 2021, P No Noire Three nights Three different casts And nothing, but the FUNK!