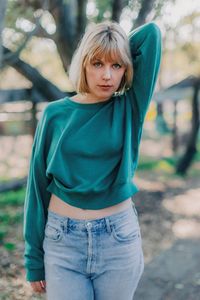 "For more than a decade, Nataly Dawn has captivated global audiences as lead vocalist of beloved indie-pop band Pomplamoose (a YouTube sensation that finds her joining forces with her husband Jack Conte, with over 400 million views to date for their hyper-creative videos). On her new solo album Gardenview, the Berkeley-based artist shares 13 exquisitely detailed folk/Americana songs that emerged as she contended with many longtime demons, repeatedly turning to songwriting as a means of accessing joy, presence, and a deeper sense of peace. Her fourth solo effort and first full-length since 2016’s Haze (a critically acclaimed release that prompted Consequence to praise her as a “force to be reckoned with”), the album presents its luminous insights in a vast array of musical forms: high-spirited folk hymns, McCartney-esque pop symphonies, indie-rock-infused retellings of ancient Taoist fables, to name just a few. In bringing such an elegantly eclectic body of work to life, Dawn collaborated with a number of close musician-friends and mostly recorded live (with minimal editing or overdubbing), endlessly tapping into her graceful musicality and incandescent imagination. Delicately sculpted yet deliberately unvarnished, Gardenview ultimately affirms Dawn as a truly singular and essential songwriting voice, wholly capable of delivering the kind of heart-expanding revelation that profoundly transforms the way we see the world."