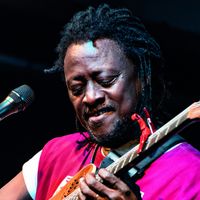 One of Africa’s most popular and recognized musicians, Habib Koité is a modern troubadour with extraordinary appeal because Koité’s musicianship, wit and wisdom translate across cultures. Hailing from the musically prolific West African nation of Mali, the guitarist and composer has been named the biggest pop star of the region by Rolling Stone. Over the past decade, his artistry and magnetic personality have made him an international star, delighting audiences the world over, and placing him firmly among the leading figures in contemporary world music. Bonnie Raitt proclaims, “first there was Hendrix, then Stevie Ray, and now Habib.”