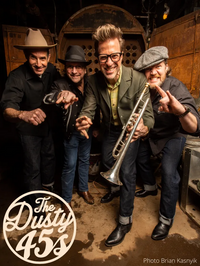 Gimme Shelter with The Dusty 45s

The Dusty 45s have inspired and fired up crowds for over two decades to the delight of fans and critics alike. With their signature style and unique sound, the band is a consistently powerful and energetic player in the Americana field.

The Dusty 45s have toured extensively. They backed Rock and Roll Hall of famer, Wanda Jackson many times, including when they joined her for Adele's "21" tour in 2011. The band has shared the stage with Brandi Carlile, Lyle Lovett, John Prine, The Ventures, Lucinda Williams, Leann Rhymes and Dick Dale, to name a few. In 2007, Huels received critical acclaim for his portrayal of Buddy Holly at Seattle’s 5th Avenue Theatre. In 2019, he interviewed PBS “Country Music” documentarian, Ken Burns, at Meany Hall in front of a sold-out audience.

The Dusty 45s have released 7 recordings. The 2014 album, “Live and On Fire”, showcases the best of their bold and brassy sound recorded live at the Triple Door in Seattle, WA. Huels and the band are currently working on a new recording, to be released in 2022.